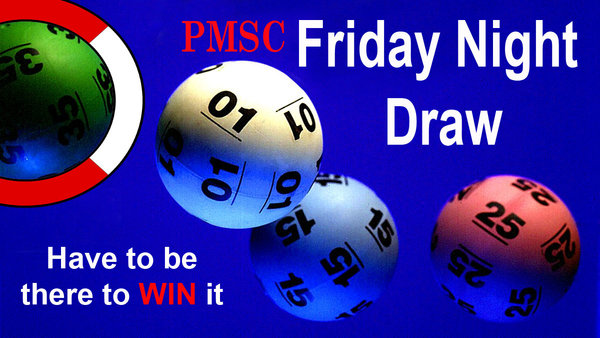 The weekly prize draw re-commenced on Friday 10th September 2021, after being suspended from 20/3/20 due to Covid-19 restrictions.

The PMSC Lucky Dip is a free draw using the Membership numbers of current paid up adult Members of the Club. The Draw takes place every Friday at 21:00. Entry is completely free and the prize will be a 'pot' of money accumulated at the rate of £10.00 per week, and, here's the cunning bit, the Prize will only be awarded if the winning Member is actually present in the Club at the time of the Draw! So, why not spice up your Friday nights – come and have a (very attractively priced) drink in convivial company, and give yourself the chance to win the Draw!

The Lucky Dip has been as high as £400 before it was won. Friday nights had brought a build up of excitement but also some speculation as to how far it should go. This was discussed at the June2018 General Committee meeting and the decision was made that it should be capped at £500 which is a good sum of money to win. The draw will therefore continue each week until that £500 is won. However, the principle of a weekly contribution to the prize from the bar has to be maintained. Therefore, a second draw (in waiting) will receive the weekly bar contribution and when the £500 is won, the second draw will come into play at whatever figure it has then reached.

There will be no draw on the first Friday in January in order to allow subscriptions to come through.

From 29/8/14, to make things interesting after the prize has been won, the pot will be set at £50 for the following 5 weeks, and then start incrementing again at £10 per week from week 6 onwards.